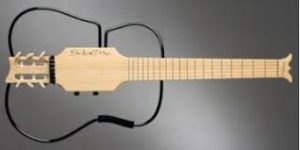 I play the guitar and try to keep enough of them around the house so there’s never one too far away. I also have two travel guitars that partially disassemble so I can easily carry them on a plane (pictured to the right).

Here are some things I’ve recorded:

Now I’m working on some of the pieces from Einstein on the Beach, also by Philip Glass.

Lyrics to “This is Deep”