Kayaking is one of my passions in life. I love everything about the sport. I am an ACA certified coastal sea kayak instructor, race kayaks, get thrashed in up to class IV white water, paddle aggressively in the open ocean, surf, and go on extended kayak camping trips.

The picture to the right was published in the local paper. I had no idea the picture had been taken and was really surprised when I opened up the morning paper and saw it. I guess that’s my “15 minutes of fame”.

I used to race kayaks.  Here are my best finishes  (all done in in a Seda Glider):

I also participated in the Arctic sea kayak race (ASKR) in late July of 2001. I didn’t do very well, but that’s OK. Just finishing ASKR is a major accomplishment (its almost 200 km of racing in five days).

Since I moved to Portland Oregon, I’ve stopped kayak racing.  The racing scene is centered in the Puget Sound which makes attending races just a bit too inconvenient.  I still train for racing, though, and spend hours every week working on paddling fast.

I love paddling in the open ocean. I have had the honor of paddling with Grey whales off Depoe Bay in Oregon and Orcas off San Juan Island in Washington.  I’ve paddled in swells the size of small buildings and have felt the adrenaline rush of massive waves throwing me and my kayak spinning end over end into the air.  The power of the sea is both humbling and addictive. 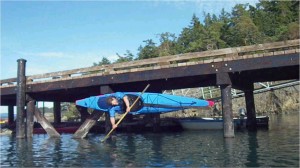 Some time ago I started a series of stupid kayak tricks. I’m sure I will have plenty more of these to come, but haven’t had the time to make it happen. Here’s a photo from my first stupid kayak trick, and some links to YouTube videos.